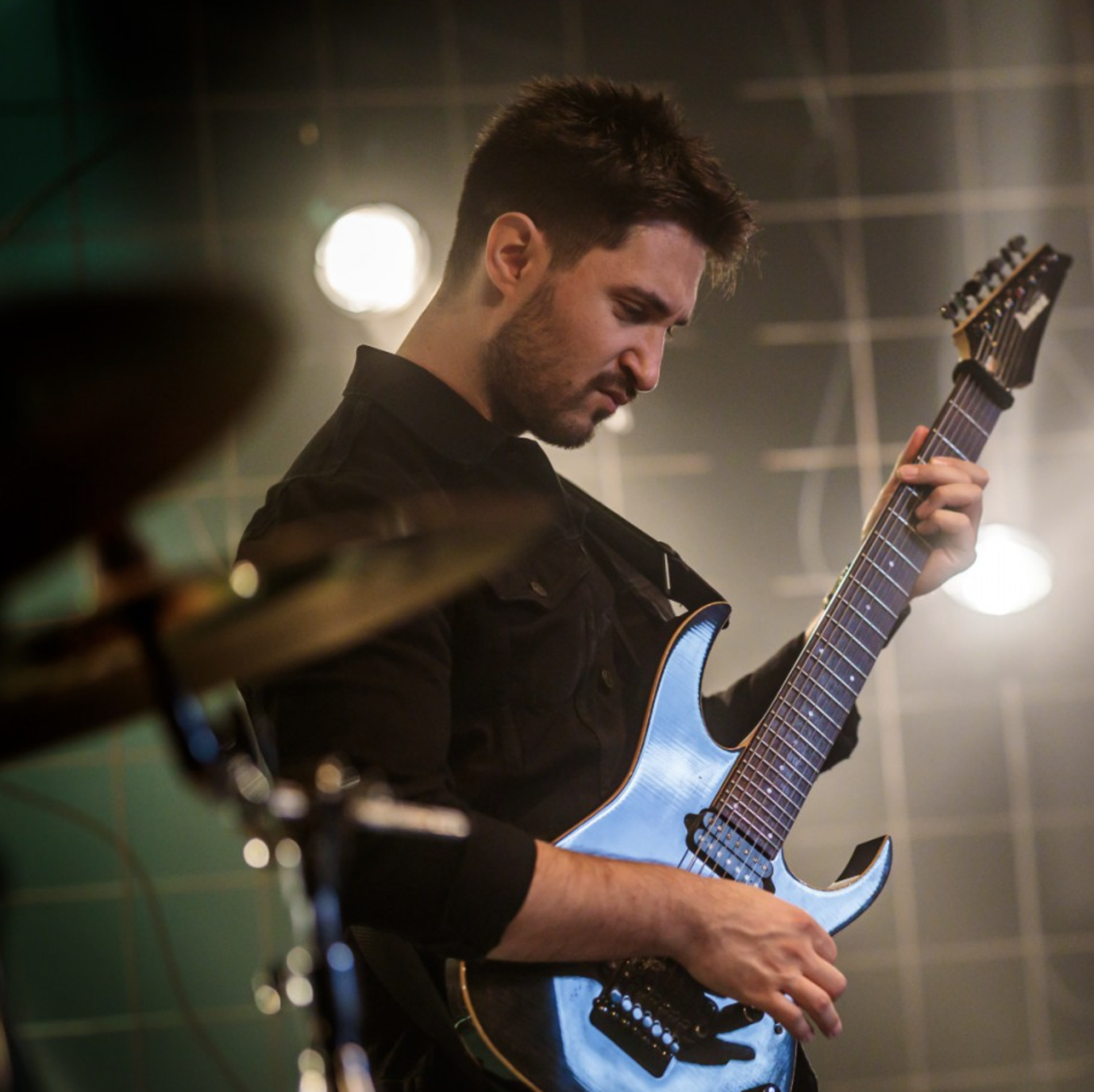 He began to study music by the age of 9, studying classical guitar at the Conservatory with the Master Francesco Buzzurro.

At the age of 16 he composed his first instrumental demo “Where do the thoughts come from?” and he was awarded the title of young talent by many music Magazines (Top Demo on Metal Shock, Chitarre, Raw&Wild, Metal Hammer, Rockeggiando.it ). During the same year, he attended Siena Jazz Clinics and he obtained the First Level Classical Guitar Diploma at the “Vincenzo Bellini” Conservatory, in Caltanissetta.

In 2008 he graduated in Business Economics at the “Luigi Bocconi” University of Milan (Title of his dissertation: Development strategies for niche artistic product. The EGEA case and Italian Jazz).

In the meantime, he graduated in Jazz at the Polytechnic of Arts in Milan after five years of studying. During this time he has had the opportunity to study with Franco Cerri, the pioneer of Italian jazz guitar.

He has been chosen as one of the 12 finalists in Guitar Idol 2011 among more than 1030 guitar players all over the world. He received a great response from both judges and the public, and his song “A night of change” was acclaimed as the best in the competition by the audience and reached more than 600K views on YouTube.

In 2011 he opened the Reb Beach (Whitesnake, Winger) and the Guthrie Govan concerts.

He attended the Nuoro Jazz seminars held by the famous Italian trumpet player Paolo Fresu and he won the prestigious scholarship for the best students. He also gained the Jazz Master Degree at the Italian Conservatory of Music “Antonio Vivaldi”, in Alessandria.

​His songs and didactic works have been published by Jamtrackcentral.com, the most renowned guitar-related label and guitar education publishing company in the world, with which he collaborates as a player and composer.

He studied Fusion-Jazz guitar with Alex Stornello and he’s been founder and director of the Modern Music Institute in Milan from 2010 to 2013. He wrote didactic articles and videos for the Guitar Club Magazine and he introduced in the market his signature “Gnazz tap-pick”, an innovative guitar pick to play eight-finger tapping.

He’s been the guitar player in the Peugeot 208 GTI Spot, broadcasted on all TVs, Cinemas, and media worldwide.

His first album “A gift to the World” came out in 2014 with a good response from the public and critics.

He obtained a Master for Didactics at the “Conservatoire Royal de Bruxelles”.

He’s playing in different projects, from Metal to Jazz, Pop, and Fusion. Likewise, he’s working as a Live/Studio session man, he’s teaching Jazz Music in the Belgian National Academies and doing Masterclasses and Clinics. He’s preparing a second solo album as a guitar player and singer, and he’s the guitar player and founder of the Belgian Symphonic Metal Band Silent Utopia, with which he published the first EP in 2019, and he is currently releasing the first album.

He published his first album as guitarist and singer-songwriter, “Trust” in September 2020

He founded the European Guitar Academy in 2020. Furthermore, he collaborates with the Universal Voice Institute in Amsterdam.